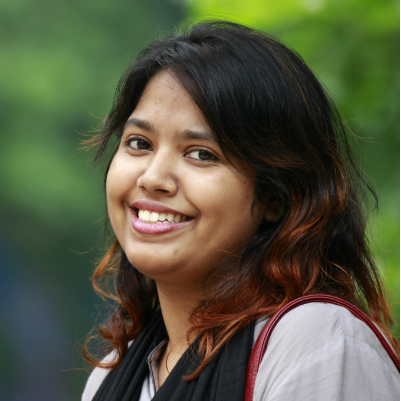 Nishat Parvez is an Assistant Professor in the Department of Journalism and Media Studies. Before joining here, she worked as a lecturer in Journalism & Media Studies at Stamford University Bangladesh.

Nishat started her career as a sports journalist at Boishakhi Television in 2012. Then she joined Channel-I, a leading media organization of Bangladesh a newsroom editor. She worked there for five years. She worked as a consultant in non-government organization Helvetas (Swiss Intercorporation). Nishat was a fellow at the Centre for Budget and Policy of the University of Dhaka. There she worked on the impact of leather industry on the environment in Dhaka City. She was also a research associate at Red Orange Communications, Bangladesh NariProgotiSongho and University of Bergen (Norway). She worked as an Editing Assistant in the magazine ‘Jogajog’(Volume-10) published by the SrabonProkashoni in June 2016.

Nishat writes for the Daily Prothom Alo, Daily Ittefaq, Seattle Globalist and Channel-i Online. She served as a member of film clubs, cultural society, and career clubs. Besides her academic career, Nisha worked on volunteering projects. She has worked for anti-addiction movements and some other social organizations. She participated as a volunteer in the Youth Volunteering & Community Projects in Sri Lanka.